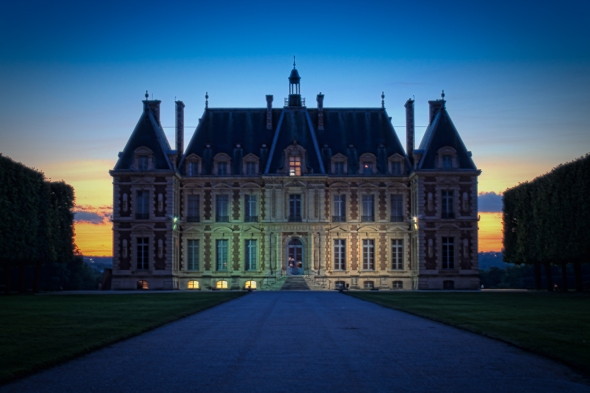 Sun setting behind the Castle of Sceaux

If I don’t have the time to go and shoot, at least I can retouch some old photos I took and publish them. This picture of the castle in parc de Sceaux was sitting on my computer for a long time, almost 3 years to be precise. I liked the picture and the tones but there’s a bit of blur that I didn’t like. But I took it through Topaz and edited it a bit so those errors aren’t too visible.

Parc de Sceaux is located a few kilometers south of Paris, it’s a very French parc with great sculptured hedges and a fantastic lawn that extends into the horizon. I shot that lawn a while back in my early “high HDR” period, which you can find here. In fact I have a few HDR pictures of Sceaux, because I just love that place.

The castle is a moderate sized castle built of bricks and stone with a similar architecture to Place des Vosges. Stefano Pinci a good friend and great Italian photographer shot Place des Vosges in HDR here if you want to compare them.

Again it’s a “dead center” photo which goes against many “rules” in photography, but hey after all I’ll do it my way wont I.  It’s an HDR photo but I tried not to go too far with the HDR. Yes it’s very saturated and the street seems unnatural, but in reality the street is like that as it’s grey/blue gravel and I took this in the blue hour of sunset. The sun was already below the horizon setting behind the castle as you can see in the sky.

If you’re going to Paris and want to get out of the city for a second (and you’re not going to Versailles) then I suggest you go to Sceaux it’s a magnificent little city which mainly consists of a huge parc and it’s castle and they often have photo exhibitions or other art exhibitions in the gardens.

That night when I shot this photo the parc staff were busy getting everyone out so I had to kind of hurry, the wind was blowing more than usual and I didn’t think it would affect my tripod until I got home and processed the photo where I noticed the camera had moved causing that slight blur.

So the HDR photography tip of the day is:

If there’s wind, don’t hesitate to add weight to your tripod to stabilize it. If you don’t feel that you can keep the tripod steady with your hand (and I don’t advise it) then attach your camera bag and gear under the tripod. And if you can’t do any of those then you’ll have to increase the ISO and clean up the noise in post production.

Voila enjoy it and if you do enjoy it, hit the share buttons below. Thanks to you all for reading all of this 🙂

Older: Berlin on fire – an HDR photo
Newer: Mobile Photography as an Art