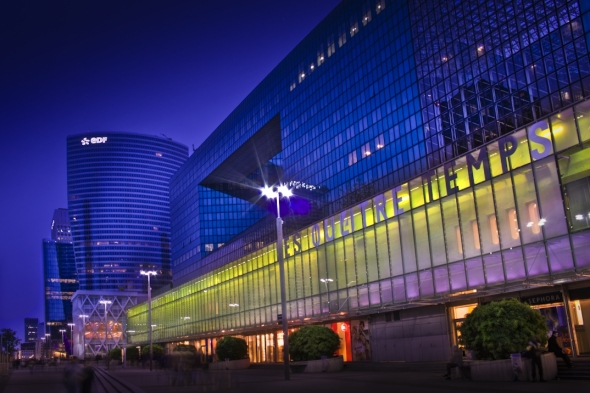 La Defense is an area slightly outside of Paris that has endless skyscrapers and modern buildings. That’s a pretty cool thing in that part of Paris, they had the courage to go “New York style” on buildings without taking out the heritage that they have. When I went there on Sunday evening (actually I went to go shopping, but don’t tell anyone) the dusk was looking quite nice.

The colorful lighting of the shopping center (Les Quatre Temps is a shopping center) was cool and I wanted to shoot it. But it was a bit more difficult because it kept changing colors, it went in waves from blue, red, green and yellow. I wanted to capture the green. Now as I was doing HDR in the evening it meant three shots, and one of the shots took about 10 seconds. So I started the photo when the colors were blue and hoped that the green would be on my photo. It almost worked this is why the colors on the right are slightly different.

Well it’s a colorful shot, I did accentuate them in Lightroom to punch them up a bit.